It’s been a long, hot summer of attacks on solar and renewable energy. Every single day this year, The Australian has run prominent smear pieces littered with “alternative facts.”

In Murdoch’s wacky version of reality, renewable energy caused the South Australian blackout, the Renewable Energy Target (and not gold-plating by power companies) is behind electricity price rises, ‘clean’ coal is an economically and technologically feasible option (pull the other one) and solar power is destabilising the grid. Of course, all of this is easily disproved claptrap. But relentless lies can have real-world consequences.

Will you help us fight back? Click here to donate to our solar fighting fund today. Solar Citizens is a community powered organisation, so every dollar counts. 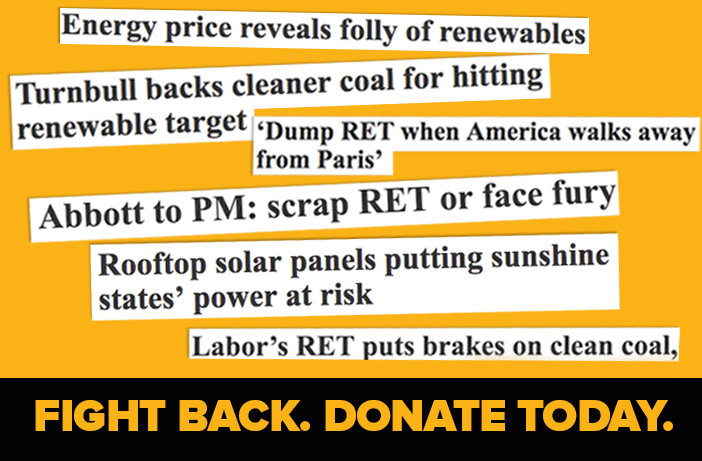 In yesterday’s National Press Club address the Prime Minister confirmed that his government has no plans for renewables post 2020, saying the Target was “never intended to be perpetual”, and warned against state governments’ “mindless rush towards renewables.” [1]

These bizarre announcements have been met with incredulity from peak business groups, with the Business Council of Australia and the Australian Industry Group restating support for the Target [3] and declaring ‘clean’ coal a dud investment [4]. The big three energy retailers are just as bamboozled, with AGL, Origin and Energy Australia indicating they have no intention of building any new coal plants in Australia [5].

So, what on earth is Turnbull playing at? Make no mistake, these announcements form part of a coordinated, brazen and insidious campaign by the Murdoch press, mining interests and the Coalition government to undermine renewables and set Australia’s energy system back decades.

And Australians love their solar. Already, 1.6 million households are literally taking back the power, investing in rooftop solar to cut bills and take control of their energy usage.

We cannot afford to be complacent. The anti-renewables ideologues will not give up and all Australians will suffer the consequences, unless we come together and fight back.

Will you help fight back by contributing to our fighting fund? We’ll use this money to supercharge our community campaigns and to amplify the voices of solar owners in the media and with decision makers. Click to to donate today.

Solar Citizens is already nipping at The Australian’s heels when it comes to circulation -- the newspaper only reaches 97,000 Australians, just a handful more than Solar Citizen’s 87,000 supporters. It’s only by all of us acting together that we can defeat this renewed attack on solar and renewables.

« Return to blog Next post: Season's Greetings from Going Solar »

Between 2006 and 2011, we published a regular newsletter on sustainable transport issues.